Home Mystery The Mysterious Chamber of Treasure guarded by Serpents!

The Padmanabhaswamy temple, a Hindu religion temple, is located in Thiruvananthapuram, Kerala’s state capital. Padmanabhaswamy (Vishnu), the main Deity, is enshrined in the “Anantha Shayana” pose, the perpetual yogic sleep on the serpent Adi Shesha. According to legend, those who try to despoil the holy spot are eternally cursed.

Treasure hunters attempted to open the Temple in the 1930s, but deadly serpents emerged from one of the vaults as soon as they did. According to some scholars, the Padmanabhaswamy temple was constructed in the 16th century by Travancore kings who hid vast sums of money inside the Temple’s thick stone walls and vaults. No one had dared to open the Temple for a long time. The ancient curse was feared by many. 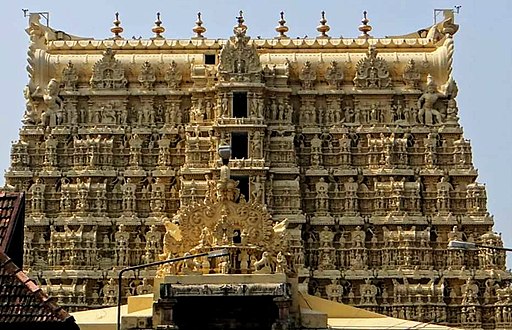 With the assistance of temple priests, archaeologists opened the underground chambers in 2001 and found six chambers, naming the vaults A through F. They were astounded by what they discovered inside. Gold coins dating back thousands of years were among the treasures. The Padmanabhaswamy temple treasure consists of gold thrones, crowns, coins, sculptures, ornaments, diamonds, and other precious stones.

It was discovered in some of the Shree Padmanabhaswamy Temple’s subterranean vaults when five of the Temple’s six vaults were opened on June 27, 2011, in Thiruvananthapuram, Kerala, India. Supreme Court of India, against a private petition seeking accountability in the Temple’s operations, ordered to open the vaults.

The treasure’s discovery drew broad national and international media coverage because it is thought to be the world’s largest collection of gold and precious stone artifacts in recorded history.

The Seventh Door Guarded by Serpents!

The temple administration was aware of the presence of at least six vaults. They were underground, all around, and to the west of the Temple’s sanctum-sanctorum. Vaults A, B, C, D, E, and F have been assigned to these vaults for documentation purposes. Vault G and Vault H are the names of two more subterranean vaults that have since been found.

What’s behind Padmanabha Swamy Temple’s mysterious Vault B Door? If history experts are to be believed, the door will open on its own when a secret chant is spelled. It is believed that the door was locked with a spell chant only.

The Trust members and other learned Astrologers of India agree that this chamber is highly enigmatic, sacred, and revealing it would be risky and dangerous. Since the Chamber-steel B’s door has two large King Cobra depictions on it and has no nuts, bolts, or other latches. The royal family then obtained an injunction from the Supreme Court prohibiting the opening of vault B in mid-July, before the locksmith arrived.

This was apparently promulgated in 2011 after a 4-day private decision-making process focused on astrology (Ashtamangala Devaprasnam). Finally, in July 2020, the Supreme Court denied permission to open the vault, citing religious feelings as a factor.

People on the other side of the door can currently hear the sounds of water or snakes, as you might have guessed. Believers claim that the seventh door is an opening from which the entire Temple and surrounding areas can be filled with water, while others claim that giant serpents guard the area inside, preventing anyone from entering. The day when we find out what’s really going on is still a long way off.

Vaults G and H are still closed and have been for decades. The temple priests have custody of vaults C, D, E, and F, which are labeled C, D, E, and F. They’ve been opened at least eight times a year in recent years, and some of the contents are regularly taken out for use on special ceremonial occasions including temple festivals, and then deposited back. On June 30, 2011, a court-appointed committee opened the vaults and entered vault A, as per the Supreme Court of India’s orders.

They removed a granite slab from the floor after unlocking an iron grille and a heavy wooden door. A few steps underneath led to a dark room where the treasure was kept. The numerous things strewn around didn’t seem to be grouped in any particular order. Baskets, earthen pots, and copper pots all contained valuable items.

The valuables are presumed to have accumulated in the Temple over thousands of years, which worshippers donated to the Deity. The donations were then stored in the Temple by various Dynasties, including the Cheras, Pandyas, Kolathiris, Pallavas, Cholas, Travancore Royal Family, and many other Kings in the recorded history of both South India and beyond.

Also, it is believed that rulers and traders of Greece, and Rome, Mesopotamia, Jerusalem, and later from various European and other colonial powers contributed to the wealth of Padmanabhaswamy temple.

Do Aliens Exist?? Five reasons that prove their existence

Treasure worth US $43 Million is burried in Virginia : Can you find it?