Residing in the depths of the rainforests of north-east Australia, the Dendrocnide Moroides is among the most dangerous plants to ever exist among the Australian stinger plant species. Known to be the most painful of all stingers, this hazardous plant has inflicted some serious harm to human life. In fact, the Dendrocnide Moroides is so deadly that even if you stay near the plant, it can lead to discomfort in the form of continuous sneezing and allergy. Ironically enough, it comes with a treat and bears a fruit that is edible for human beings. 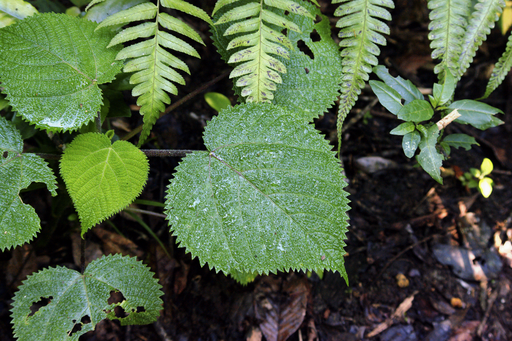 Given its appearance, the Dendrocnide Moroides is often referred to as the stinging brush. Many people call it the suicide plant for its venomous nature. What may be disguised as harmless fuzz to many is actually a carpet of poisonous needles on the very surface of its leaves and stems. However, names like Gympie, Mulberry-leaved stinger, and Moonlighter are used as well.

The Dendrocnide Moroides usually grows as a single-stemmed plant reaching 3-9 feet in height. It has large, heart-shaped leaves with a length of about 12-22 cm long with a width of approximately 11-18 cm with sharpened toothed margins. It is an evergreen plant and has an extremely misleading appearance.

Dendrocnide Moroides are one of the most malicious species which inflict unbridled pain to the ones in contact. The pain is so extreme that it can last for up to a few days or even months. They happen to have stinging hair-like needles that provide cover to the whole plant and release neurotoxin when touched.

The most common and deadly encounter is when a small bulb on the tip of the stinging hair comes in contact with your skin and injects a toxin straight into the body. In spite of the dangers it beholds, the fruit carried by the plant can be eaten if the covering of the stinging hairs is removed properly. This fruit is mulberry-like, juicy, and has a bright pink-purplish shade.

The plant was discovered in 1866 by a North Queensland road surveyor A.C. Macmillan. He reported to his boss about his packhorse being stung by the Gympie Gympie plant. The horse got stung, became insane, and died within two hours of getting in contact with the Gympie stinger. Similar stories revolved in the locality about the horses dying of the stinging plant and the locals drinking excessively to reduce the pain.

The strangest thing about the plant is that the leaves of D.moroides get hollow upon contact. Its silica tipped hairs start to break off, penetrating the skin and resultantly injecting the toxins into the contacted body. It has also been explored that some of these plants do not contain stings but still possess hair, which leads to a chemical change in the toxin. The pain caused by the stinging hair of the D.moroides usually lasts from several hours to even days.

In some cases, it might put the victim in intensive care if not treated instantly. Its effects do not just weave off after a day or two, rather the degree of pain lessens in several months, but the affected area of the body aches instantly when touched, exposed to water, or subjected to temperature change. The affected area of the body is covered with small, red spots to form a swollen weal.

The damage is not just inflicted upon touching the plant, but the stinging hairs are released into thin air when the plants are cut down. This can cause respiratory issues and therefore, if you are in the area where the Gympie Gympie stinger is present, make sure you have respiratory protection. Sneezing, runny noses, mild nasal bleeding, and throat irritation while cutting or clearing were common symptoms after coming in contact with the stinger.

An Australian World War II veteran, Cyril Bromley, explained his experience being stung by the Gympie stinger. He fell on the plant during military training and spent three weeks on a hospital bed with a streak of unsuccessful treatments administered. He described his pain as “as mad as a cut snake.” Cyril also shared a story of an officer shooting himself as he could not bear the excruciating pain caused by using the stinging plant for toilet purposes.

The horrendous effects extend to the fact that some of the victims of the Dendrocnide moroides denote that it stings like acid. Les Moore, a victim, said, “I think I went into an anaphylactic shock, and it took days for my sight to recover.”

“Within minutes, the initial stinging and burning intensified, and the pain in my eyes was like someone had poured acid into my eyes. My mouth and tongue swelled up so much that I had trouble breathing. It was debilitating, and I had to blunder my way out of the bush,” Moore added.

Ernie Rider, who was slapped on the face torso with foliage in 1963, said, “I couldn’t work or sleep for two to three days. The pain was unbearable. Then it was pretty bad pain for another fortnight or so. The stinging persisted for two years and recurred every time I had a cold shower. There is nothing to rival it; it’s ten times worse than anything else.”

Small marsupial species, including the red-legged pademelon, insects, including the Prasyptera mastersi, and birds are believed to be protected from this said poisonous plant, and the aforementioned species can eat the leaves of the stinger.

Dendrocnide Moroides caught the attention of the British Chemical Defence Establishment at Porton Down, once a top-secret laboratory that developed powerful chemical weapons. Alan Seawright, then a professor of the pathology of the University of Queensland, was contracted by the British Chemical Defence Establishment in regards to the specimens of the stinging plant.

Alan said that “Chemical warfare is their work, so I could only assume they were investigating its potential as a biological weapon-I never heard anything more, so I guess we will never know.”

We truly cannot know if this dangerous plant has been used in the past or might be used in the future, but its potential surely opens up gates to be employed as a lethal biological weapon.

Apparently, there is no use for this plant to be found other than being presumptuously considered as a biological weapon, a fruit edible for humans, which is, of course, seldom chosen by them as edible due to its stingy hair covering. It is also considered as a local food for the very selective segment of the wild. Apart from this, there is no medical use of this plant to be reported as yet.

The Gympie stinger holding the status of being one of the most venomous species till now, is still incurable. The victims spend days to get treated in intensive care and sometimes just succumb to the pain and die. Efforts have been made to find a cure and to search for the medical uses this plant can bring in.

In the past, there is a supposition that Dendrocnide moroides may have been used as a biological weapon, and if this is the case, it needs to be stopped from getting any worse. For now, it should be ensured that the workers, researchers, or even tourists must be educated about these species and protected in the vicinity of the Gympie gympie stinger.

A Morrocan woman served Machboos made of her lover’s genitals!

How Chicago City was lifted from a Swamp by using hydraulic jacks and Jackscrews.

Have you heard about a visually impaired riding a bike? The Real Life Batman: Daniel Kish