What is the one thing under which people do whatever they wish to? Well, we call them rituals. Various countries involve themselves in indulging in otherwise useless activities. Glorifying various claptraps under the name of rituals is what people have been doing for ages.

A ritual is a series of actions involving gestures, words, actions, or objects, worked in an isolated area, and according to a set order. But what if these rituals are too bizarre to take in? Religion, caste, spirituality, etc. have a significant impact on the human mind. People tend to go to extremes to fulfill these psychological needs. Have you heard about corpses being dug out and danced around, or dead bodies being eaten by humans? No, right? Well, these rituals even allow girls to be beaten to death during their puberty. So, why not share some of the creepiest and most offensive rituals around the globe. 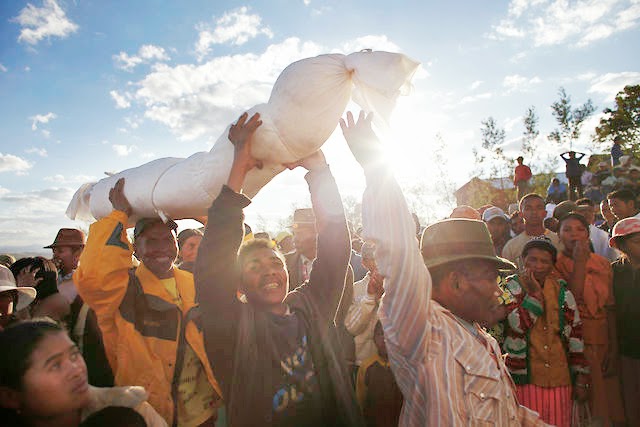 Famadihana is a funerary tradition of the Malagasy people in Madagascar. In this tradition, people dig out the dead bodies of their ancestors once in every seven years. While carrying the corpses on their heads and shoulders, they dance around the tomb. They rewrap the bodies in fresh cloth and write their names on the fabric to ensure they are remembered forever. The tradition is based on the assumption that the spirits of the dead enter the realm of ancestors after the full decomposition of the body and the necessary rituals, which can take several years.

The bodies of some Hindu castes are considered too sacred for cremation. They so are floated down India’s Ganges River. The Aghori Babas take these bodies and eat them in a ritual as a symbol of triumphing over fear. The Aghori is a small community of ascetic Vamacharic Shaiva Sadhus. They devote themselves to post-mortem rituals. They also live on charnel fields, spread ashes from cremation on their skin, and use bones from human bodies to make kapalas (skull cups) and jewelry.

The Dani tribe of Papua Province of Indonesia is one of the most isolated tribes residing in Western New Guinea’s central highlands. The Dani tribe follows a tradition ‘ikipalin’, in which a woman’s finger is amputated to show respect and grief for the loss of a loved one. Digits represent peace, unity, and strength for the Dani people, and they believe that fingers work together as a family. Thus, the custom signifies the agony of the grief of losing a close acquaintance.

In many highland villages of Papua New Guinea, people cooked and ate the body of a person who died. They believed that it was not good for the body to be eaten by worms and instead preferred to eat it themselves. This act symbolizes their love and grief to the deceased. Women and children eat the brain while men eat the flesh. The Dani people hoped that the deceased’s spirit would stay close to living family and tribe members. This practice was banned after the spread of a deadly disease.

In the Menses rituals of Uaupes, Brazil, the girl is secluded with only bread and water during puberty for one month. Girls are carried naked out on the streets and beaten to death or until they are unconscious. When the girl wakes up, she gets beaten up again, and it is repeated four times or till the girl dies, whichever is earlier. The tradition is followed to ensure if the girl is worthy of marriage or not.

A Morrocan woman served Machboos made of her lover’s genitals!

Larry : The Man who built a personal aircraft with balloons to fulfil his dream of flying.

An Angel disguised as a Human!